A cowlick is one of the few styling curses that not only men but also women with different hair types may have in common. Even though it’s just one or a couple of hair sections that refuse to go along with the hairstyle, dealing with them might be pretty frustrating as they can actually ruin the whole look. If it makes you feel any better, mere mortals aren’t the only ones who have such hairy trouble: practically every second celebrity deals with that. And the only thing that makes you different from them is that most of them have learned how to get it under control. Today, we will make it all even and share with you the secrets told by celeb professionals. Let’s make those stubborn hairs behave!

What Is a Cowlick? 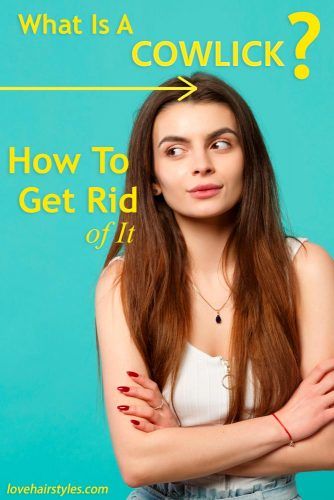 Save to
Source: ViDi Studio/Shutterstock So, what is a cowlick exactly? The cowlick definition may vary depending on one’s hair type and pattern. The term got its name after the bovine's habit of licking its calves, though. Still, in general, it’s a steady, stubborn hair whorl that either stands straight up or lies at an angle, standing out from the rest of the hair. Remember the tough styling trouble where all of your hair goes nicely in one direction and then suddenly some hairs don’t listen? That’s it.

The truth is, cowlicks are very common with people of all ages; almost everybody has it, even though it’s not always easy to detect.

The hair swirls may take place practically everywhere. Usually, they appear on the top of the head. That's because the crown is the area where two different directions of hair meet. But, many people also have it in the nape area, on the front near the hairline, and on the back of the head. As we told you already, celebrities are no strangers to the mean nature of a hair cowlick. Yet, they still manage to look their best. The good news is, we’ve found perfect living examples of how to conceal the swirl and make it work for your look. 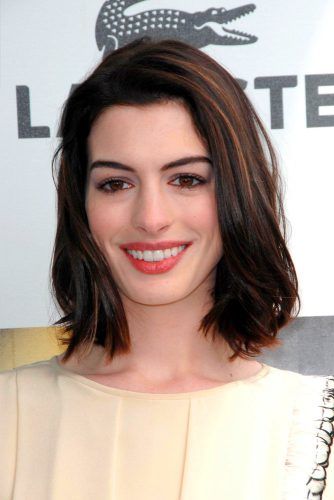 Save to
s_bukley/Shutterstock You may not expect that, but Anne Hathaway, who’s hair is just to die for, also struggles with the sticky hairs at the front. The right hairstyle choice masks it completely, making it seamlessly blend with a voluminous front strand. To do so, her stylists give her hair a slight wave and tame the swirl with lightweight gel brushed into the forefront tresses. Adding a bit of tousling is a genius way to make the look totally harmonic. Even if the cowlick in front of hairline will give itself away, it won’t appear too drastic due to the slightly messy feel in the hairstyle. A tip: if you have a hair swirl at the front of your hairline, there’s an effortless way to work around it. For front cowlick bangs is the best solution: they will simply overlap those hairs or make them look as if they’ve been styled intentionally with a fringe. 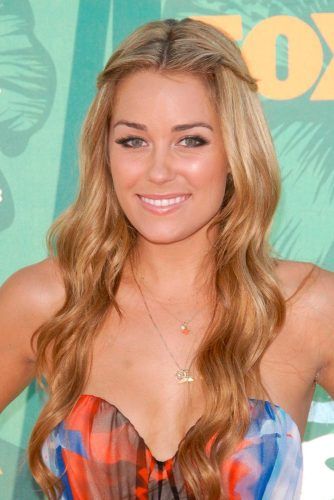 Save to
Everett Collection/Shutterstock Lauren Conrad, for example, knows what it’s like to have a double cowlick. And there’s nothing bad about that when you have enough styling ideas to finally make it work for you. A middle-parted hairstyle that also splits the swirls into two can visually make them appear less noticeable. Crown twists from both sides not only add some lift to the long hair but also hide the traces of the front whorl, leaving just a couple of hairs out. And it looks absolutely normal! This look can’t do without good styling gel. Make sure to apply a small amount, covering those hairs with just a slight layer of the product. Also, Conrad herself doesn’t really like to work with styling products because of the build-up: a couple of passes of flat iron is her favorite way to get the look done. A tip: If your hair whorls really bother you too much, let your hair grow as long as possible. The longer the hair, the less obvious the stubborn hairs are. Plus, on longer hair, they’re more manageable, as the weight of long tresses keeps them in place. 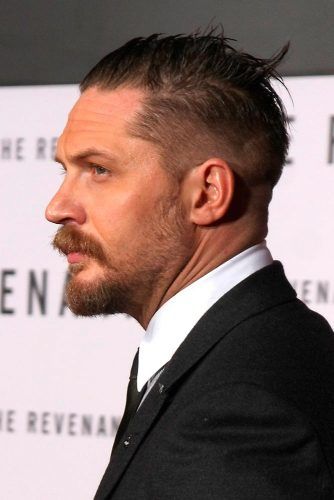 Save to
Kathy Hutchins/Shutterstock See? Even the hottest male sex symbol Tom Hardy has a cowlick on the back of the head. Well, this man is always on point, and his hair whorl definitely knows its place. Although Hardy wears short length hair, which makes the unmanageable hair stick out, even more, he does manage to tame it the right way every time he shows up in public. His main weapons are firm clays, strong-hold pomades, and hood blowdryers that help him to create the needed parting. Sometimes he goes for undercuts, asking his barber to fade the cowlick evenly so that it’s not so drastic. A tip: Your hair care routine is the first thing to consider when trying to work things out with your hair whorl. Go for more conditioning rather than shampooing to make this tough area more manageable: natural oils and moisture in hair help to keep it in place.
The Editor's Choice

How to Get Rid of a Cowlick: Pro Tips That Work 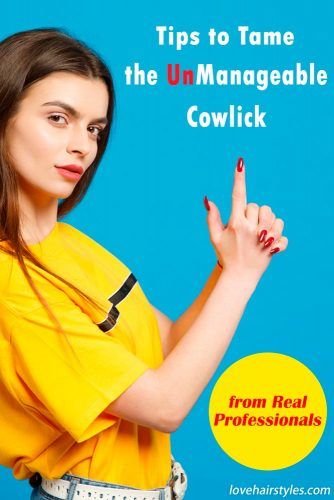 Save to
s_bukley/Shutterstock Now, it’s time for you to discover the ravishing, fool-proof professional salon tips on how to get right of a cowlick. Follow them, and your cowlick hair will finally surrender. Your styling routine may encounter various obstacles. And a rebellious cowlick that loves to mess around with your hair and do its own thing is probably the most unpleasant challenge you could ever get stuck with. But, with the right approach, you can make this hair whorl know your place in the world. Luckily for you, we’ve shared tips that modern celebrity hairstylists use to make their clients flawless, so you can reach perfection with your look as well.

Is a cowlick natural?

There is no way to remove a cowlick. It’s just a natural hair growth model you were given at birth. Cowlicks even made some people turn to laser hair treatments.

How rare is a cowlick?

Cowlicks are a common problem. According to a 1972 survey, it affected 91 percent of all babies in the United States. However, you might not be able to determine if someone has a cowlick. They are quite difficult to reveal in long hair, as well as in certain hair textures.

Will shaving your head get rid of cowlicks?

Sadly, there is no method to get rid of a cowlick in your hair permanently. As it was said before, they occur when hair grows in a certain model or when the follicles are specifically shaped.