The history of mustache styles is long and rich. Yet, one thing that has been preserved since their very emergence is a great visual impact that changes the entire appearance of a wearer. Just like beards and types of stubble, this facial hairstyle can individualize a man’s look, giving him a unique and, most importantly, self-expressive look.

Though the mustache was out of fashion for some time, it’s back to make modern gentlemen’s styles complete. Today you are going to find out why they’re the most requested ideas in barbershops and see how you can work on your facial features with them. 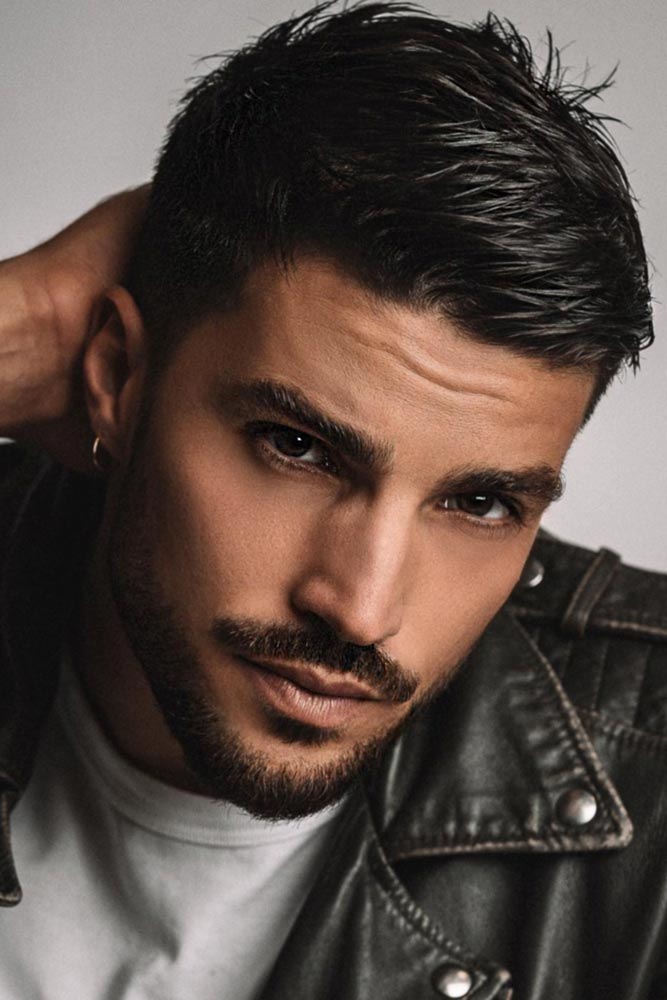 Let’s start with a simple but pretty significant mustache style. As you can see from the pic or its name, it’s nothing but a strip of facial hair over the upper lip. It’s a good option for both newbies and men who don’t want their mustache to be too bushy: it’s modest, low-maintenance and masculine at the same time.

Men who appreciate minimalism and would like to keep up with sophistication in their looks can opt for the pencil-thin mustache. Its name perfectly describes its appearance and can fit a modern mod’s image while being a good match for faded styles. This idea adds a bit of an edge to the wearer’s lips, making the look more precise and manful.

If you have an even stubble growth, you can try rocking the abrupt combo of a slight mustache and a lightly developing beard. Together, these two form a very effortless, sexy look that somehow steps out of immaculacy but is still not an I-don’t-care look. 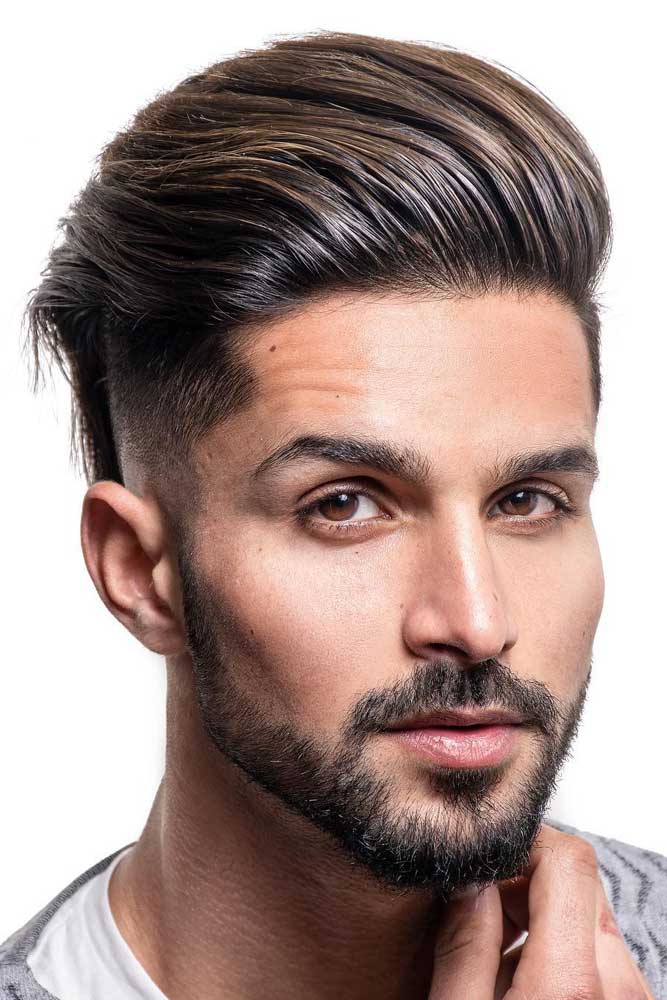 As one of the most contradictory mustache styles, the Anchor beard also stands among the latest styles of now. Some men find it to look ridiculous because of the mix of a pointed beard with a soul-patch, whereas most men think it to be a perfect complement to their styles. Actually, there are men who can look better with such ideas: those with rounder face shapes can build some sharpness. 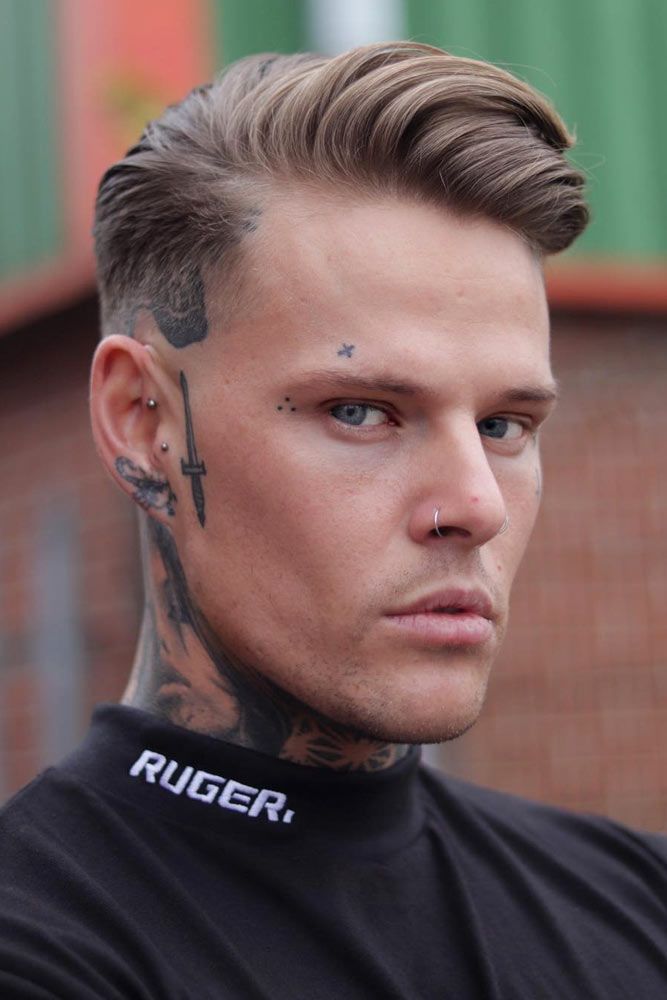 Sometimes only a hint of a mustache is enough. The shadow mustache is probably the easiest style to create. Just let your facial hair grow for two days and the look is ready. Of course, to achieve a more accurate silhouette of the “shadow”, you can even out its edges with a trimmer. 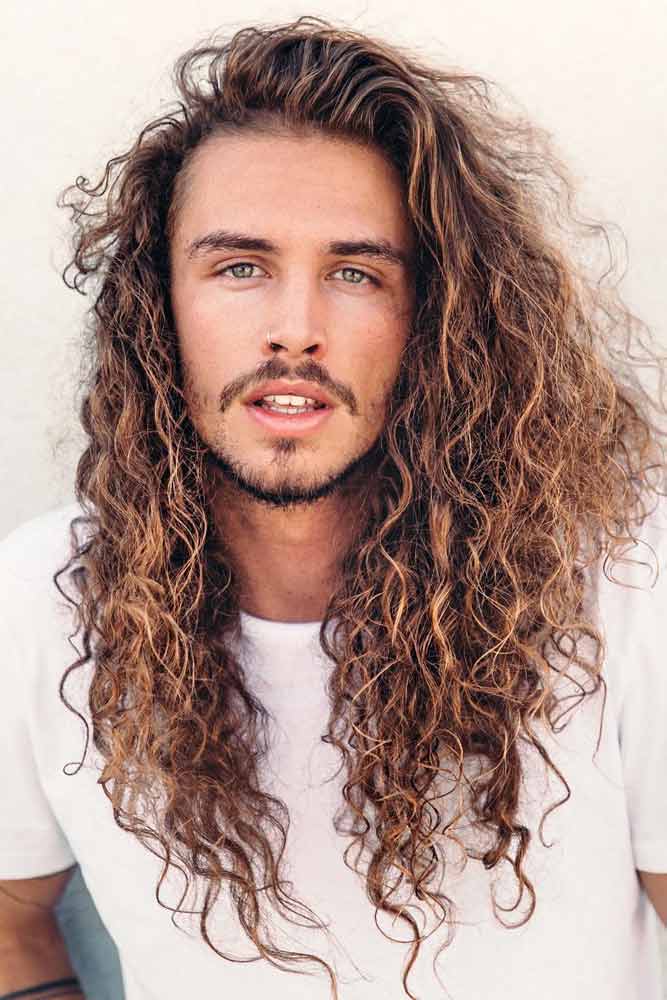 The Zappa mustache is a sharp and distinctive combo of a wide soul-patch and a full mustache. Besides comfortable maintenance routine, the feature that makes it so wanted among guys of all ages is the curvy edges of the ‘tache. Many barbers recommend pairing this style with stubble in order to add a sense of lightness to a bit bushy silhouette. 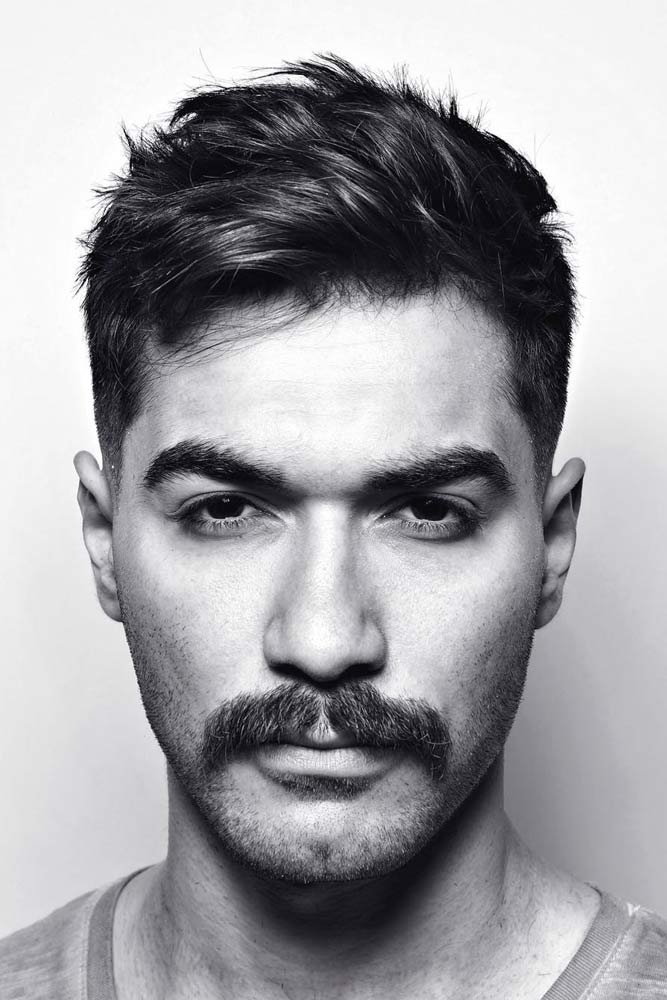 What makes a cowboy a cowboy? Well-trimmed Dallas mustache, of course! And while a cowboy style seems to be messy and carefree, the ‘tach should be as immaculate as possible. If you want to go for such a style, don’t forget to trim and shampoo it regularly. 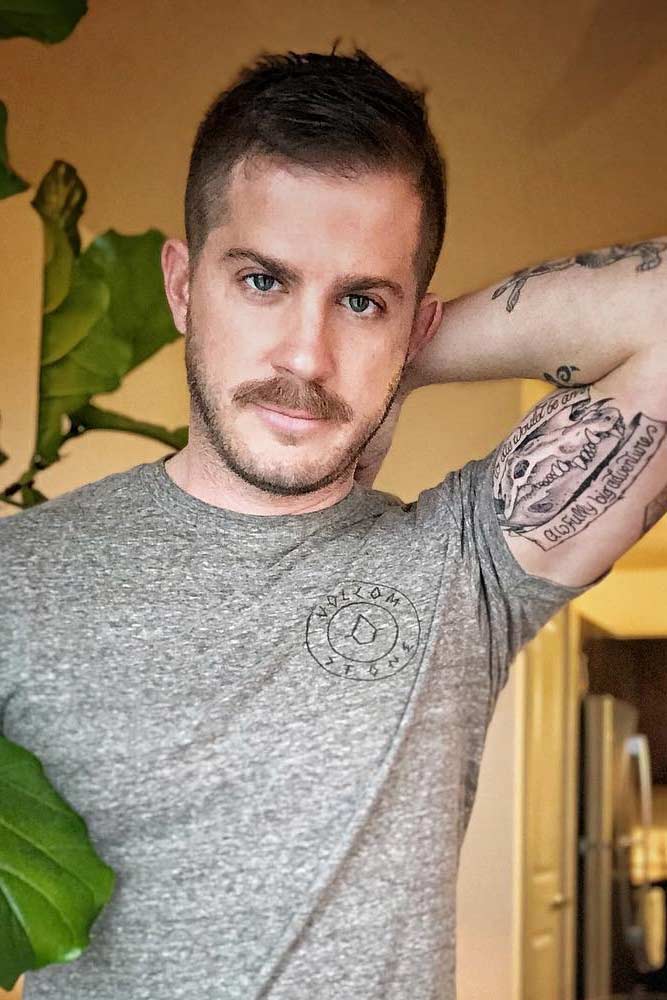 The pyramid mustache is one of the best mustache styles ever for two reasons. First, it gives a sophisticated, presentable appearance to its wearers. Second, it works for all face shapes. So when you want to grow a mustache but don’t know which style to choose, this versatile option is key. 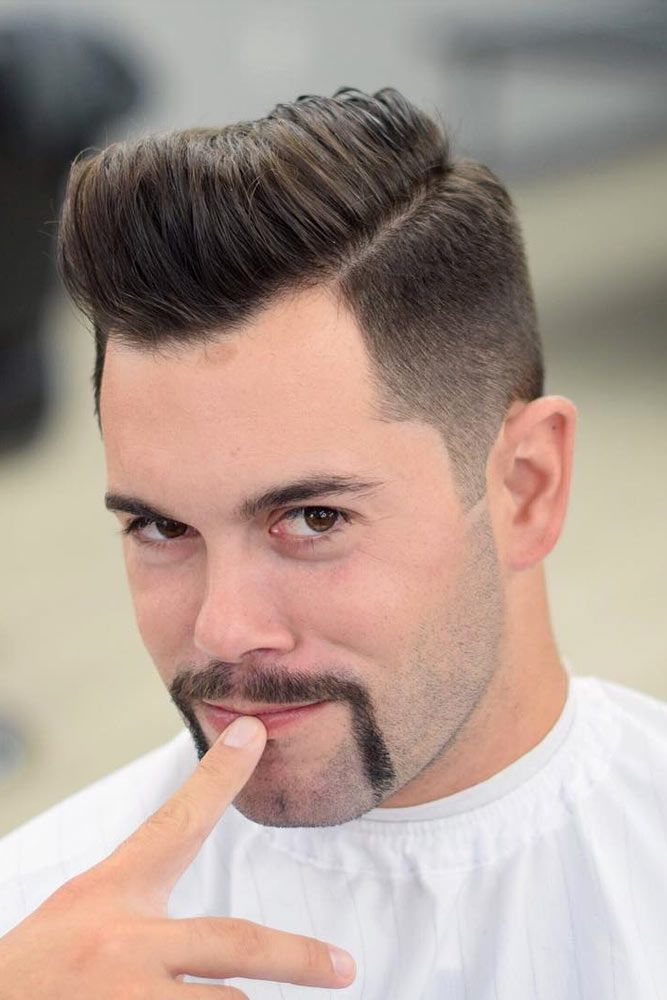 Guys with round or square faces who want to make the silhouette of their shape fuller should look no further than the horseshoe mustache. But you should be ready that this is one of the few mustache styles that really catch people’s eyes. Also, it looks at its best just as it is, a beard will make the look too drastic and hide the “charm” of the style. 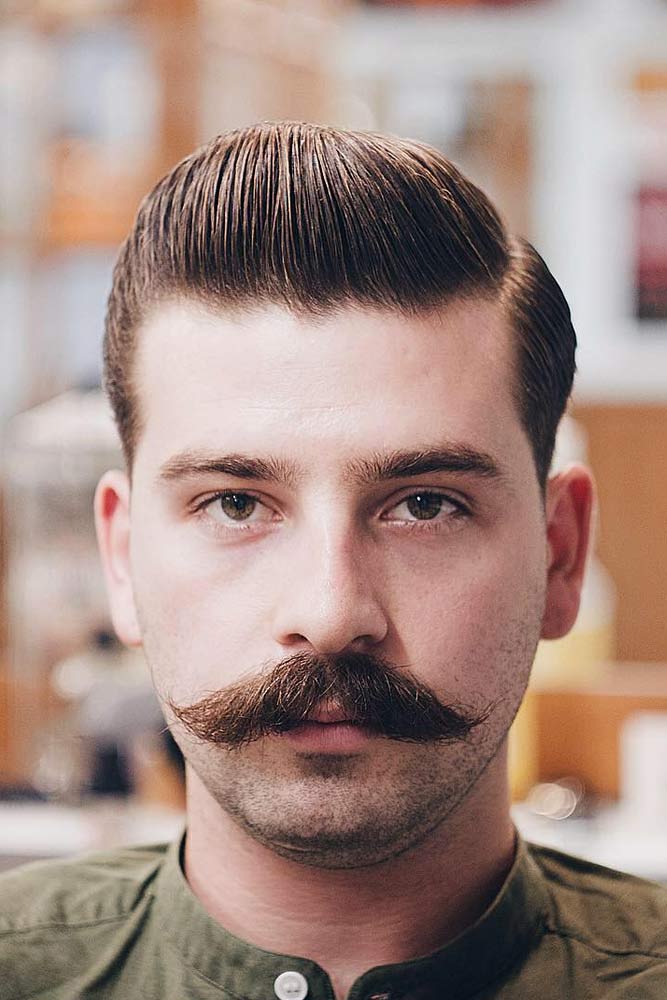 The walrus mustache is just the opposite of clean-shaved look that takes years off. Yes, there are some beard and mustache styles that can make one look older, so you should think carefully whether it will suit you or not. As for its advantages, it can nicely work on big noses and broad faces, balancing out all the features. 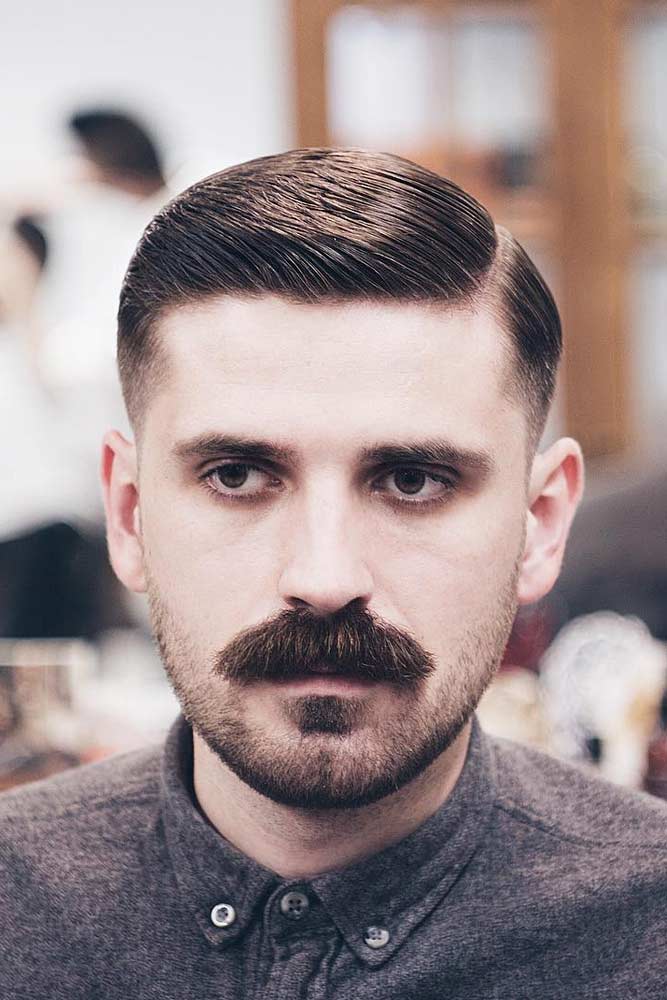 Looking for a decent macho style? Here comes the Chevron mustache that brings a lot of retro-daddy vibes. It’s a thick, mature style that gets on well with short, well-gelled hairstyles and light stubble as a finish.

To pull off handlebar mustache styles, you should be ready for a long-lasting commitment. Growing out such a long ‘tache is a pretty tough deal, and the same goes for its upkeep. But the distinctive and fun look that suits all face shapes is worth all the efforts!

There are lots of different mustache styles with different structures and shapes. And the common thing they share is that they all bring a lot of character to men’s looks. You’ve just seen the most attractive and requested ideas of today. Of course, it’s never too late to grow a mustache. But we recommend you not to set aside this idea for too long if you want to rock a unique look.

How do I choose a Moustache shape?

Should your mustache cover your lip?

The mustache should cover your upper lip partially, however it should not get into your mouth. Trim longer hairs with beard trimming scissors and trim the mustache’s edges so that they don’t stretch lower than your mouth corners. Any lower than that and you are in a “horseshoe” mustache area.

90 Balayage Hair Color Ideas To Experiment With in 2022