The beginning of the Scarlett Johansson short hair history is closely bound up with the overwhelming popularity of The Avengers. Still, there’s no need to figure out whether she cut her magnificent chevelure short for a role or just to fit her lifestyle. Moreover, there’s one thing we can tell for sure: the actress knows how to get the most out of a short haircut.

You don’t need to be a Scarlett’s fan to check out the amazing short-hair pics we’ve prepared for you. But, having seen them all, you are going to become one, as the way this lady pulls off popular short haircuts is a real source of inspiration. 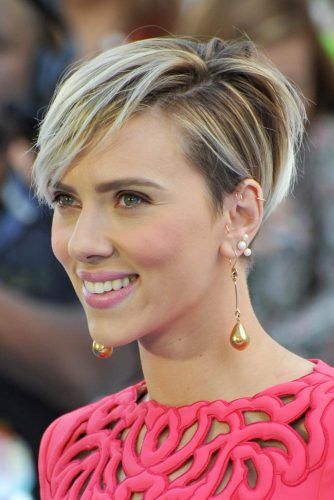 Remember Scarlett Johansson short hair Rough Night stylists brought to life to make her character more mature? This look was spotted a couple of years earlier the movie release. And here, the actress shows how creatively one can sport the classy pixie-bob.

Following the classic pattern, her hair gets shorter to the back thus forming a voluminous crown. It usually gives a well-groomed and elegant look. That’s why here Scarlett decided to go a bit messily, adding some individuality to the idea. 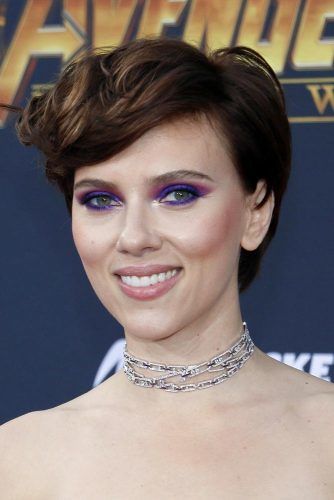 Here comes the most impressive recent look that has become a trend since the premiere of the long-awaited movie. It seems like nothing can compare to Scarlett Johansson short hair Avengers masterfully displayed. Indeed, the look was chic, edgy, and still pretty feminine.

As for the premiere look, the celeb revealed the full potential of the pixie, showing up with its long and wavy version. 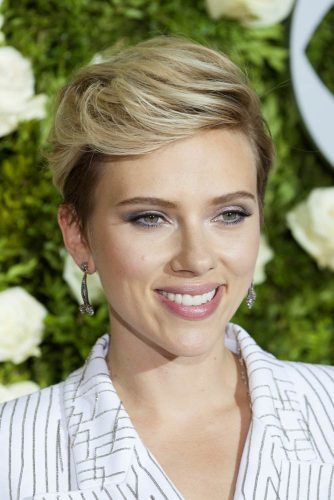 Scarlett Johansson short hair 2017 was changing faces throughout the whole year. As a result, the actress pulled off almost every pixie variation, becoming a real pixie nailer.

Here she strikes cameras with a stunning layered pixie parted to the side. With the help of top layers, the style looks extremely voluminous, thus keeping the perfect balance. 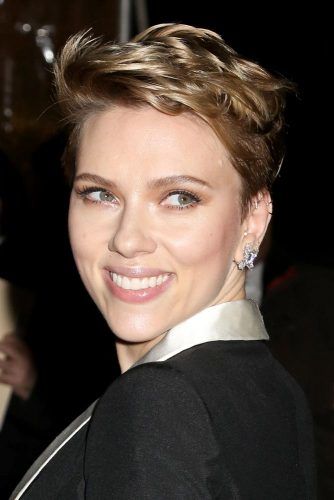 In fact, your pixie can be anything you want it to be, following your mood and the upcoming occasion. And this Scarlett Johansson short blonde hair idea is proof. To add some more carefree vibes, she got her hair layered and highlighted the choppy top with a texturizing product. 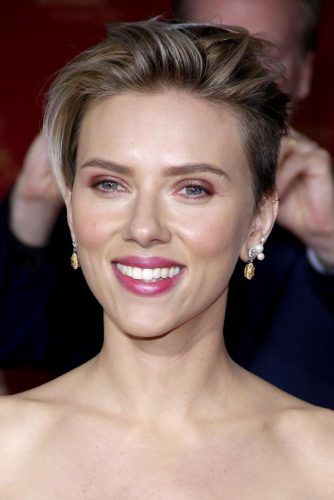 A stylist who decided to cut Scarlett Johansson hair short is a genius! And the same goes to a person who was responsible for her premiere look in 2015 when she first showed off her bold pixie with an undercut.

Her short sides were awesome for two reasons. First, they enhanced her appearance. Second, they gave a bolder look to her sassy pixie. 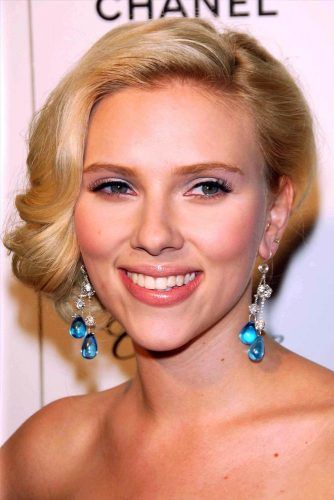 2007 was the year when Scarlett Johansson short length hair was only a dream. She was rocking a medium length cut at that time. And one day she came up with a thought of changing something in her look.

The style you see above is nothing but waves folded under the top layer of hair. In this way, the hairdo appears like a wavy bob, which, not to mention, looks great. 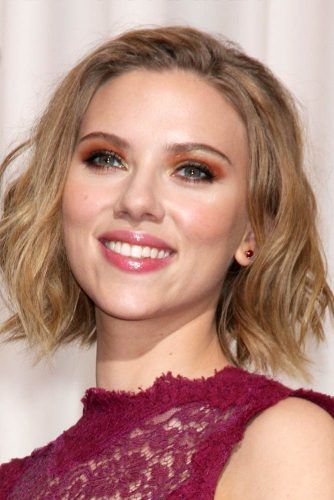 This messy bob was the very first Scarlett Johansson short hair cut. It’s no secret that her long, thick, and lush mane was to die for. Yet, it turned out to look at its best when it’s short.

Here, little messy waves gently fall on one another, giving an elegant and wild touch to her look at once. Who could ask for more? 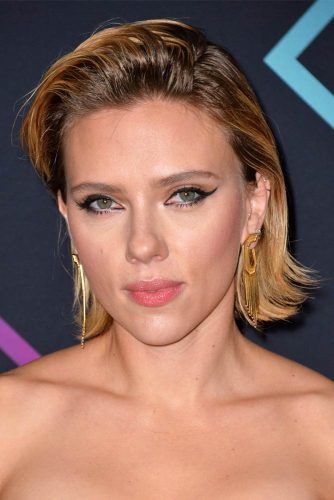 It’s time for an idea of short hair Scarlett Johansson has simply personified. In her latest bob look, she goes on playing around with textures and cutting techniques.

She let her pixie grow out and turn into a short bob, and then used her favorite products for wet-hair looks. There’s nothing easier than brushing well-gelled hair backwards, but the result is worth a red-carpet walk. 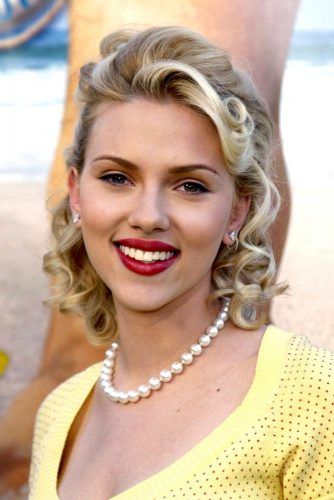 If you’ve never seen Scarlett Johansson short curly hair, here’s a lovely half up that will show her image from a new angle.

These waves are so twisty and bouncy that they look like curls at some point. Well, this is what makes the look so special! Some waves create volume while others give dimension. Isn’t that a perfect style to choose for some special occasion? 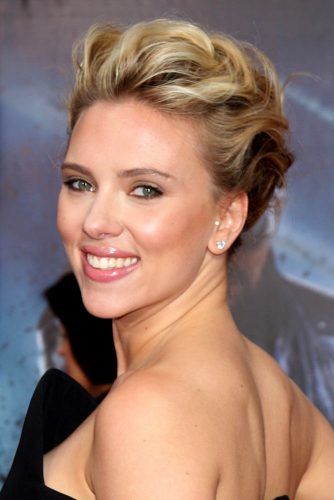 Still think that it’s impossible to turn a pixie into an updo? Here’s a little Scarlett Johansson short hair tutorial.

Actually, everything is so easy that there’s no need in a tutorial. The only thing you need is to wave your hair, moving backwards, pin the waves in place, and twist longer sections into a messy bun. Voila!

Even if you haven’t seen a movie featuring Scarlett Johansson and are not familiar with her talent, today’s pics are enough to realize that this actress is not afraid of transformations. Now that you know how the celebrity makes her hair fit her image perfectly, why don’t you do the same? Recreating one of her pixies would be a nice start!

Why did Scarlett Johansson cut her hair short?

Aside from her distinctive plump lips, one of Scarlett Johansson’s most recognizable beauty transformations occurred in 2014, when she shaved off all of her hair while pregnant with her first kid. Scarlett knew how to use a few centimetres of hair to achieve a variety of looks, from sweet to sultry, edgy to exquisite.

What type of hair does Scarlett Johansson have?

Scarlett Johansson isn’t scared to experiment with various appearances. Despite the fact that her hair is naturally brown, she has colored it a variety of colors, ranging from platinum blonde to a red to a deeply dark brunette! She’s also made some intriguing decisions concerning her appearance.

What face shape does Scarlett Johansson have?

Scarlett Johansson’s face is diamond-shaped. She has a heart form face with strong cheekbones and a thin chin, yet her longer face without widows peak makes it diamond-shaped. 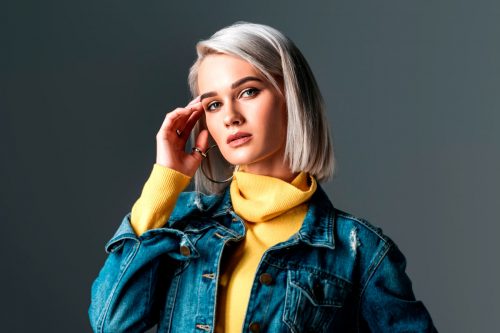